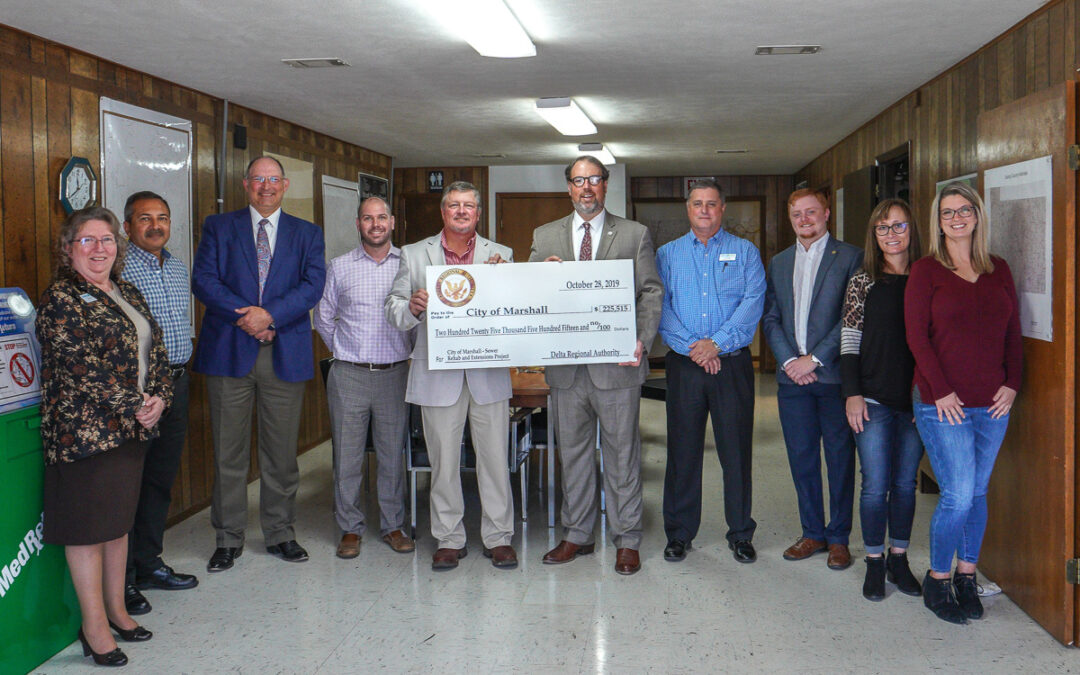 Marshall, AR (10/8/2020) – The Mayor of Marshall, AR, Kevin Elliot, was pleased to formally announce the completion of the city’s sewer rehabilitation & expansion project that was made possible through a grant totaling $231,770 from the Delta Regional Authority (DRA).  Northwest Arkansas Economic Development District (NWAEDD) assisted the city of Marshall in obtaining the grant.

Mayor Kevin Elliot was able to a celebrate this milestone on October 1st at the Marshall City Hall with some of the members that contributed to this achievement.  The funds allowed Marshall to extend existing sewer lines for a new hotel that will boost job growth for the area.  The Marshall Elementary School will also benefit from increased sewage capacity.

DRA enhances regional economic opportunity by working to create jobs, build communities, and improve the lives of over 10 million people who reside in the 252 counties and parishes of the eight-state Delta region. DRA Federal Co-Chairman Chris Caldwell said “DRA’s critical investment into vital infrastructure will ultimately strengthen economic success in Marshall.” Caldwell also noted, “None of this would have been possible without support from the Arkansas congressional delegation, especially Senator Boozman and Congressman Rick Crawford.”

Mayor Kevin Elliot congratulated everyone involved.  The mayor said that he “wants to make a change to better the area.”  He went on to say that “Northwest Arkansas Economic Development District was a huge asset.”  NWAEDD’s, Tina Cole, assisted Marshall with securing the funding and throughout the project with grant administration services.  Other attendees included Jeremy Rawn from Engineering Services Inc. who provided the professional engineering services for the project.

Through this collaboration with the City of Marshall, DRA, NWAEDD, ESI Inc, and the community, Marshall now has an expanded sewer system that will position the city to grow jobs and expand opportunities for years to come.